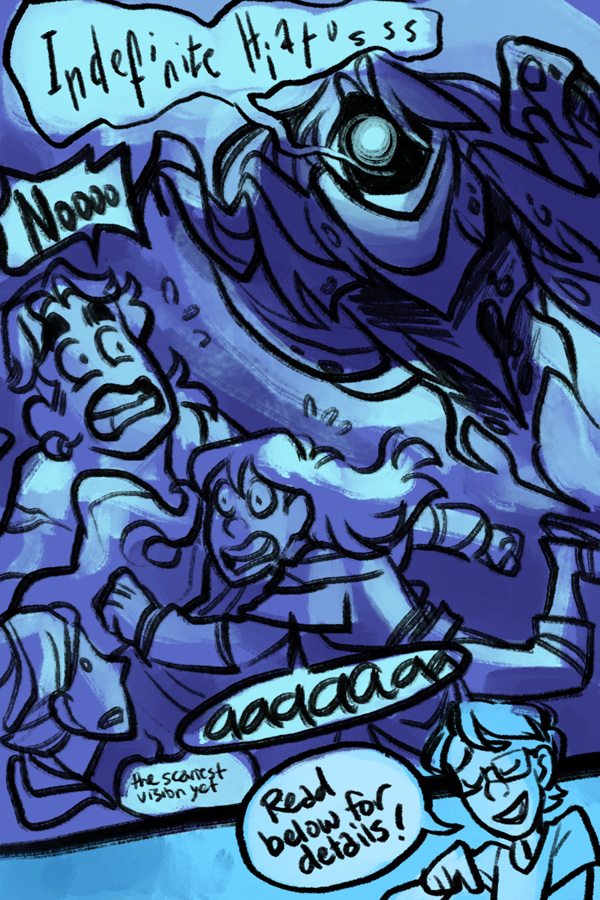 Runewriters is Paused for Now!

EDIT UPDATE: The store, at least the part that I run, is closed for now, which I accomplished by marking everything as "Out of Stock." I haven't been able to keep up with orders even while they're slow, so until I'm at a place where I can really focus energy on that, the book part of the store will be closed. I had wanted to put Book 4 up before I did this, but I would rather wait and do that when I'm able to follow up than try to make it happen and get overwhelmed. I'll make an Actual New Post so that RSS readers get notified when the store is open again! [/EDIT]
------

It's July! So it's time for me to update you on what's going on with the comic, and with me.

The conclusion I've come to, as the spooky friend up there has mentioned, is that I'm gonna need to put Runewriters on indefinite hiatus. I wanna check in at the start of each year and let you guys know if anything's changed or if we're still in chill mode, but other than that, I'll probably be quiet over here.
There's a couple reasons -- the smaller reason is that my current comicking method isn't sustainable, and I need to find a method to produce work I'm happy with that won't wreck my hand in the process! The larger reason is that I'm really creatively burnt out on Runewriters.
It's tough to describe. It's still a story I'm attached to and really want to tell, but sitting down and thinking about it at all is... exhausting. I do need to set it aside completely, without pushing myself to figure out when I can Get Back Into It.

In the meantime, as some of you may have heard, I've gotten a job! I'm now an artist for Tattered Weave -- I've started making some of their tiny clothes and other art assets that haven't been released yet. It's really exciting! I was always worried about getting an art job like this, afraid I wouldn't have time to work on my stories anymore. But right now, while I can't work on my story, it's a really great opportunity to keep creating and solving creative problems without putting pressure on myself to Produce and Monetise Personal Content.

Will Runewriters come back?
I hope so! ...I know that this isn't a question I can answer with certainty -- losing touch with your own story while on hiatus is a tale as old as time, and RW is a big story I can't just crank out. I know how scary an announcement like this is. I don't wanna push through burnout and produce a bad comic, but it's still a story I really hope to tell. I can't plan or predict how things will go -- I do want to finish it as soon as I'm able! But at this point, we'll have to wait and see. I can only promise to keep you guys posted as much as possible!
I'm still deciding what to do about the store. I think I'll probably put up book four sometime this week and leave it open for a month or two and then close it until I'm up and doing stuff again? I'll keep you guys posted!!

If you just wanna keep up with my art, I'm still on tumblr and twitter, and my patreon is switching over to be sketchblog posts and livestreams for folks who just wanna see the stuff I do for fun while I'm taking a break!

Thanks to everyone who's been so kind through all this. This is scary, and I know it's definitely not what y'all were hoping for, but I know it's what I need to do! Thank you all for being so supportive and understanding while I figure this stuff out. <3